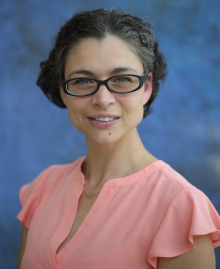 The overarching research goal of the Guryanova Lab is to delineate the mechanisms of the cross-talk between epigenetics and chromatin organization, learning how these processes apply to the development of acute myeloid leukemia (AML), resistance to therapies, and clonal evolution. Ultimately, Dr. Guryanova would like to harness this mechanistic understanding to develop improved therapeutic approaches for leukemia.

DNA methyltransferase 3A (DNMT3A) is the third most commonly mutated gene in AML, present in up to 30% of all de novo AML cases. Clinical observations show that together, with alterations in NPM1 and by activating internal tandem duplication in FLT3, mutations in DNMT3A define a subtype of AML — one with a particularly grave prognosis due to high disease relapse rates. The majority of DNMT3A mutations result in a single amino acid substitution at arginine 882 (R882), leading to decreased processivity of the DNA methylation, although the enzymatic activity, per se, is retained. DNMT3A mutations are among the earliest genetic events in leukemogenesis present in pre-leukemic hematopoietic stem cells (HSCs). The frequent finding of DNMT3A(R882) in elderly individuals with clonal hematopoiesis but without hematologic malignancies suggests that these mutations may drive clonal evolution towards increased HSC fitness and competitive advantage.

The lab has developed a clinically-accurate genetic mouse model of Dnmt3a-mutant AML. Using this model, they have shown that presence of mutant Dnmt3a renders the cells less sensitive to daunorubicin, a standard anti-leukemic chemotherapeutic agent of the anthracycline family. This chemoresistance is specific to anthracycline-induced DNA intercalation and torsional stress, and it is independent of topoisomerase 2 inhibition. These findings align well with clinical observations that mutant DNMT3A defines chemoresistant leukemic and that pre-leukemic clones that survive induction chemotherapy persist in remission and give rise to disease relapse. Subsequent biochemical studies identified a defect in nucleosome eviction and chromatin remodeling through attenuated recruitment of histone chaperones as a molecular mechanism of increased DNA torsional stress tolerance.

The current work in the lab is focused on further delineation of the molecular mechanisms underlying altered chromatin remodeling, on the investigation of clonal evolution in the blood system, and on the pre-clinical evaluation of candidate therapeutic approaches for DNMT3A-mutant leukemia.