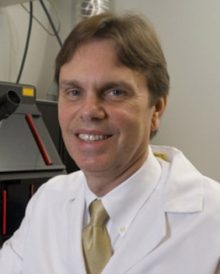 Dr. Sweeney’s basic research interests are focused on molecular motors of the myosin superfamily. Most notable among his accomplishments on molecular motors are the first visualization of structural rearrangement of the myosin lever arm, a detailed analysis of how processive myosins are engineered, a demonstration of the structural changes induced by actin-binding and nucleotide release, and the discovery and molecular dissection of the only known reverse-direction myosin.

Much of Dr. Sweeney’s research program is translational in focus and has produced highly cited research on inherited forms of cardiovascular disease and on the skeletal and cardiac aspects of muscular dystrophy. Dr. Sweeney was elected as a Fellow of the American Heart Association in 2001. He has been the director of a Paul Wellstone Muscular Dystrophy Cooperative Center since 2005, which is now competing for renewal as a University of Florida (UF) Wellstone Muscular Dystrophy Cooperative Center. Dr. Sweeney is actively developing therapeutics for rare diseases that include both small molecule and gene therapy approaches. He serves as a consultant to a number of industry therapeutic development efforts for Duchenne muscular dystrophy and spinal muscular atrophy.

Dr. Sweeney is well-known in the popular press for his gene-therapy approaches to permanently block the loss of age-related muscle size and strength in mice. The technique suggests that therapies for humans could reverse the feebleness associated with old age or slow the muscle-wasting effects of muscular dystrophies. Based on the enhancement this creates in healthy young animals, Dr. Sweeney has been widely sought as an expert commentator on the potential for gene “doping” in sports, as well as on the bioethical issues surrounding genetic enhancement. In 2004, this work led to Dr. Sweeney being among those chosen by Esquire Magazine as the “Best and Brightest” in America.

Dr. Sweeney is also heavily involved in small molecule therapy development for muscle disease. In 2007, he and his collaborators at PTC Therapeutics (a small NJ biotech company) published the development of a compound (PTC 124 or ataluren) that allows read-through of nonsense mutations (premature stop codons) in a variety of genetic disease models. The drug is in clinical trials for Duchenne muscular dystrophy and Cystic Fibrosis. For this work, Dr. Sweeney was awarded a Hamdan Award for Medical Research Excellence from Sheikh Hamdan of Dubai in 2008. On May 23, 2014, ataluren was granted conditional European approval for the treatment of Duchenne muscular dystrophy (DMD), making it the first approved drug for this disease.