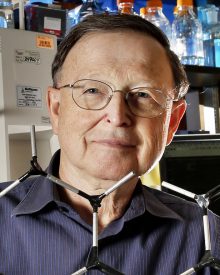 Naturally occurring toxins possessing high affinity and selectivity for particular cell receptors are excellent molecular probes in biomedical research. My lab currently investigates marine toxins, which affect cholinergic receptors and ion channels. We have found that manipulation of the structures of these substances can eliminate toxicity without abolishing therapeutically useful effects. Two types of toxins, currently the major projects of this laboratory, are briefly described below.

As a graduate student, I discovered a toxin, anabaseine, which a marine worm uses to paralyze its prey. More recently, in a project with Drs. Meyer and Papke, we demonstrated that this bicyclic nicotinic alkaloid, when derivatized with an aromatic aldehyde, yields a compound which selectively stimulates alpha7 nicotinic receptors in the brain and enhances cognition. DMXBA (GTS-21) also displays neuroprotective activity and is much less toxic than nicotine. Phase I clinical tests of this compound were completed recently, and its utility for treating Alzheimer’s disease and schizophrenia will be assessed in the near future. Unlike the high affinity nicotinic receptors which drastically decrease in number as Alzheimer’s disease progresses, alpha 7 receptors are not greatly affected and therefore can continue to serve as a CNS drug target. We recently demonstrated that the primary metabolites of GTS-21 are even more potent alpha7 agonists than the parent compound and can serve as models for design of even more optimized drug candidates.

We are also investigating peptide toxins, which potently block sodium and potassium channels. For example, a 35-residue sea anemone toxin, ShK, was synthesized by solid-phase methods. The K channel binding domain of ShK, identified using an “alanine scan”, only contains 5 key amino acid sidechains. The most important are Arg 11, Lys 22 and Tyr 23. An ShK analog in which the Lys 22 sidechain is shortened possesses superior selectivity for the Kv 1.3 channel, which is uniquely expressed in the T-lymphocyte cell membrane. Blockade of this channel inhibits activation of T-lymphocytes by mitogens and antigens. Thus, ShK toxin analogs as well as peptide-mimetic molecules of ShK may become useful drugs for preventing immune rejection of transplanted organs and for treating autoimmune disorders. In addition to these two projects, we continue to isolate and characterize new toxins to serve as neurobiological probes and molecular models for drug design.